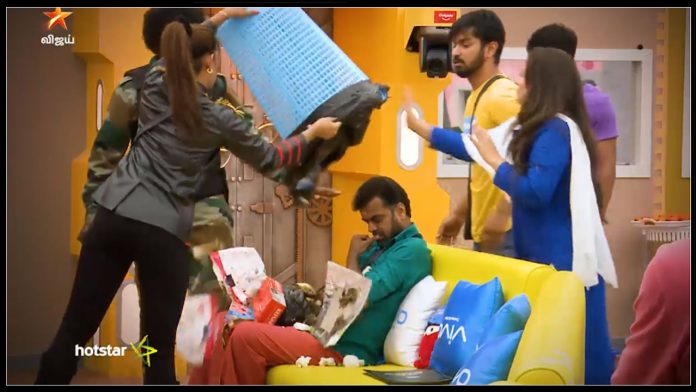 The Bigg Boss Show is getting more heat day after day. This week Aishwarya Dutta is the captain and in yesterday episode it looks like Aishwarya was normal and she was yelling at Balaji and Mumtaj.

And today the Vijay Television released the promo video in their social media handler. Please check the video below.

It looks like there is a task in Bigg Boss house whereas Aishwarya Dutta is the queen and Dannial is the security for the queen. And in promo Aishwarya was telling that she is going to do all the worst things to Balaji. And she took the Dustbin and put all bags of dust on Balaji, when he was sitting in the living area.

There is no clue why she is doing like that but on seeing the Mumtaj is started crying and cleaning those dust from Balaji and Mahat is also trying to stop Aishywarya (Queen) before she doing it to Balaji.

We can witness that the show is getting more wild and contestants started showing their real faces and their masks are getting torn. And there is no doubt that there will be more fights coming in today’s episode.

And also in yesterday’s episode Nomination Process was not telecasted, we couldn’t find the exact reason why they didn’t telecast it. Hopefully, today show will begin with the nomination process.