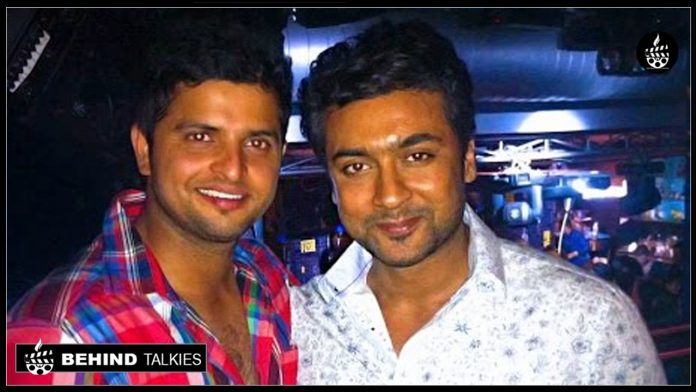 Actor Surya is one of the leading actors in the Tamil cinema industry. Now he is busy in acting in films like Kapaan, Sooraraipootra and untitled film with Siruthai Siva. And Surya is currently awaiting the release of NGK on May 31. The film is directed by Selvaragavan and bankrolled by Dream Warrior Pictures.

NGK is a political drama, which has Suriya as an upcoming politician Nandha Gopalan Kumaran. Sai Pallavi is paired opposite Suriya in the film, the film also stars Rakul Preet Singh in another main role. NGK has been testing the patience of Suriya fans for a long time.

Recenetly surya has conducted a chat session with his fans in twitter and answerring the fans questions. While interacting with fans, to everyone’s surprise, Cricketer and Chennai Super Kings star player Suresh Raina came out on the chat session and posted his question to surya.

“Which player is from chennai super kings is yours favourite and why ?? ” raina posted this question. After seeing raina on his chat session surya became exited and replied”its unbelievable, that you had time and you able to do this. very very sweet of you. my love to all at home to the little princes to everyone. Definetly i dont want to be partial. But, i need to name (i think you ll also accept) mr dhoni” he says.

And he continued” I still remember the first time we met. You came and said hello to me, though I missed you, the photo we have taken together is something that is memorable. I still cherished the picture, Its lovely to be in touch. I completly enjoyed last season, Always Csk Fan” he said.