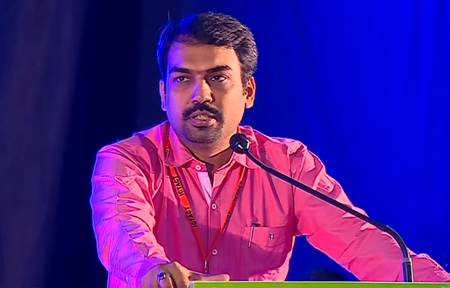 Rangaraj Pandey is Chief News Editor in Than TV, famous TV channel in Tamilnadu. His parents are originally from Buxar district, Bihar state. And he was born there in Bihar. His Father name is Ragunathachariyar.

When he was 2 years old his parents migrated to Srivilliputhur, Tamilnadu.  Rangaraj Pandey said in an interview that his parents still don’t know to talk in the Tamil language fluently.

He was studied in Srivilliputhur, Government Higher secondary school. He had grace and interest towards the Tamil language which made him complete his MA Tamil in Madurai Kamarajar University in 1999.

He joined as a writer in Dinamalar, daily Newspaper. He wrote an article in a pen name ‘doubt danabal’ which was very famous and received an overwhelming response from the reader.

After 12 years he joined in Thanthi TV in 2012, over the period of 6 month time he was promoted twice and now he is editor in chief of Thanthi TV.

He has been hosting 2 regular shows now. One is Ayutha Eluthu and another is Kelvikenna Pathil.

The reports say that Rangaraj Pandey is getting paid 1.5 lakh salary for each episode that he hosting in Thanthi TV.