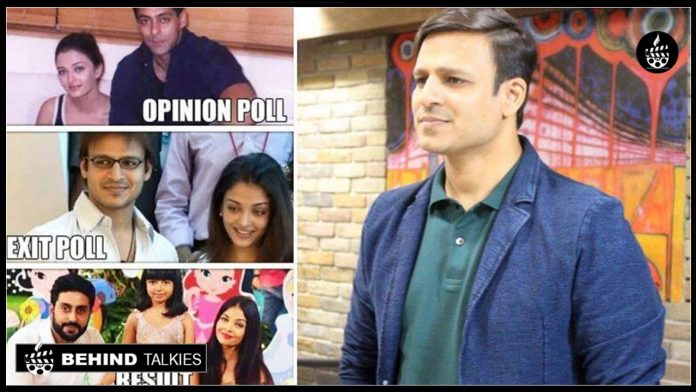 Yesterday Vivek Oberai shared a meme in his twitter account. Many people felt dicusting on seeing the meme because its badly featuring Aiswarya Rai with her husband Abhishek Bachchan, daughter Aaradhya and Salman Khan and him as well. The meme pointing out that Aishwarya had once dated Salman Khan (calling it opinion poll), but later moved onto poll), (exit poll) and finally settled down with Abhishek Bachchan (the end result). Vivek Oberoi shared the meme with this caption : “Haha, creative. No politics here, just life.”

After sharing this dicussing meme twitter users gone extreme and charging oberoi with lot of criticisms. After many hard hitting comments from the social media users the Vivegam actor replied to the controversy and saying that “He has not done anything wrong, his team, on the other hand, said that his social media was hacked since the afternoon which has created all this issue”.

But, his answer was not convincing for the fans and hence he later again took his twitter page and menstioned ” Sometimes what appears to be funny and harmless at first glance to one, may not be so to others. I have spent the last 10 years empowering more than 2000 underprivileged girls, I cant even think of being disrespectful to any woman ever “

And after this tweet he deleted the meme and posted a another tweet and menstioned ” Even if one woman is offended by my reply to the meme, it calls for remedial action. Apologies! tweet deleted.” Meanwhile the actor is currently busy on promotion of his upcoming film ”
PM Narendra Modi” which all set to hit the theatres on May 24.