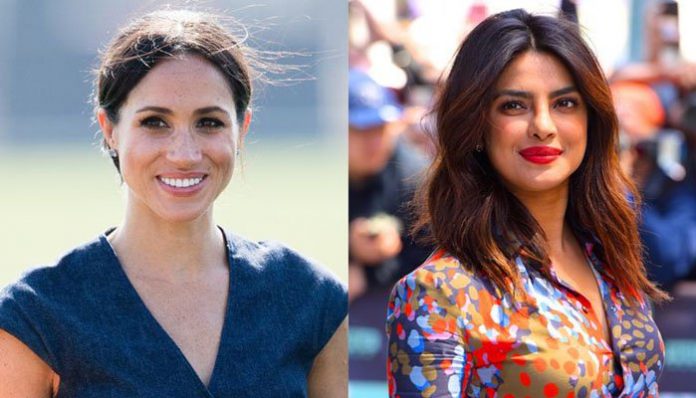 It seems like things are not going well between Meghan Markle and Priyanka Chopra and the speculations are that it might cost the friendship between the duo.

It all started with the lavish baby shower that took place a few weeks back in New York. Many popular celebrities from Amal Clooney to Serena Williams graced the occasion. It looks like Priyanka Chopra’s name was also on the guest list, but she did not attend the baby shower function.

The rumoured reason is that the Duchess of Sussex did not attend the lavish wedding of the international star in India. It is speculated that the 36-year-old star wants Meghan Markle to apologize for this or their friendship stands void and null. An inside source said that their friendship is over unless the Duchess of Sussex apologizes. PC is a huge international celebrity with a terrific social media following. She is probably more popular across the globe than Meghan is.

Meghan Markle has recently become more famous, ever since she married Prince Harry. PC has worked in both Hollywood and Bollywood, and her fan base will be definitely more than Meghan. Priyanka Chopra felt that the Duchess was not respectful to her as well as to their friendship.

Though it was initially speculated that the Duchess could not attend the wedding as she was busy with royal engagements as well as her pregnancy. Priyanka also gave a similar reason for being help up with her meetings about a book that she is penning for not attending the baby shower of the Suits actress.

But, Priyanka Chopra rubbished all these rumors in a recent interview and assured the fans that her friendship with Meghan Markle is still intact.