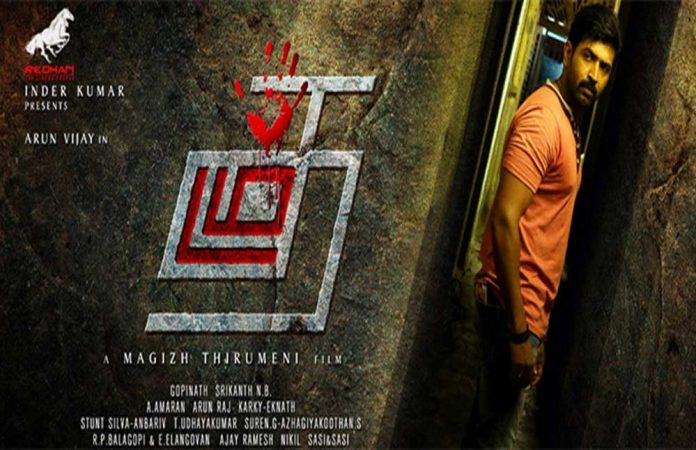 Actor Arun Vijay’s ‘Thadam’ is a whodunit thriller flick that is closely based on several real-life crimes where the accused are identical twins. Director Magizh Thirumeni has utilized this idea of identical twins, which is a new concept and weaved a gripping story which is appealing and crisp with a pulse quickening shock and suspense in the climax.

Ezhil (Arun Vijay) is a civil engineer who lives a normal upper middle class lifestyle. He owns an expensive BMW car, lives in a lavish bungalow and his life goes in the correct direction with his construction company performing well. He is in a relationship with film journalist Deepika (Tanya Hope).

Ezhil’s twin brother is Kavin, who is a shrewd, street smart, con artist, who tricks money from bootleggers, woo several women, and knows all the flaws in the legal system. His only drawback is the gambling which he inherited from his mom (Sonia Aggarwal) who got separated from her husband when her sons were young.

The lives of both Ezhil and Kavin didn’t cross each other at any point of time. The twin brothers live their own life until a crime takes place in the city and Ezhil is caught by cop Gopalakrishnan (Fefsi Vijayan) with respect to his picture which was found in a selfie taken by the neighbour of the deceased. Also, police arrest Kavin in a drunken driving case and he is brought to the same station causing confusion among the police officers.

Both Kavin and Ezhil deny their involvement in the crime. Gopalakrishnan wants to frame Ezhil for personal reasons, so he asks his smart assistant Malarvizhi (Vidya Pradeep) to solve the complicated crime. The remaining part of the story is how police find the real murderer.

The screenplay will surely keep you hooked up till the end. The director neatly portrays the contrasting journey and lifestyle of the twin brothers. Until the sequence where both the brothers meet, we don’t know their story and why they look alike.

The major drawback in the film is the forced flashback story featuring Sonia Agarwal, as her role neither creates buzz or sympathy. But, Magizh Thirumeni compensates it the last 20 minute climax filled with plenty of twists and turns. The screenplay is stylish and smart.
Thadam’s biggest plus is Arun Vijay’s convincing acting as Kavin and Ezhil. Even though the brothers look alike, Arun Vijay displays unique body language and dialogue delivery for the two roles.

Vidya Pradeep has lived her character as the smart cop. Fefsi Vijayan and Yogi Babu are perfect. On the whole, if you overlook the dud flashback scenes, Thadam is an interesting must watch thriller film.