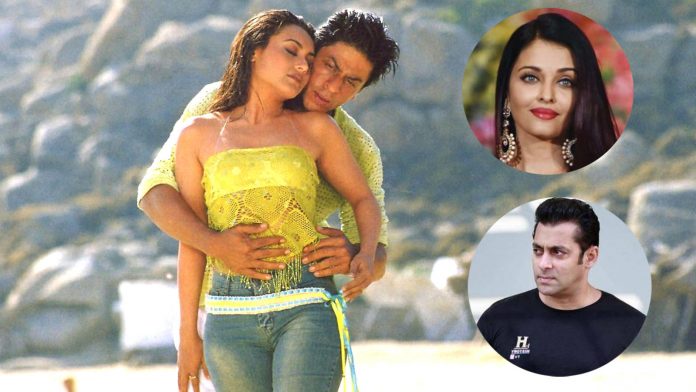 If stars Raj Aryan and Megha made us cry in ‘Mohabbatein’, Dev and Paro’s stunning chemistry in Sanjay Leela Bhansali’s ‘Devdas’ has been imprinted in our memories. Even though Shah rukh Khan and Aishwarya Rai didn’t portray each other’s love interest in ‘Josh’, audiences loved that too.

The duo was in a rage in the late ‘90’s and early 2000’s. Therefore, when Shah Rukh Khan planned to feature in is own production ‘Chalte Chalte’ the fans were very happy with the news. But, King Khan had to drop her from the movie – find out why.

Shah Rukh Khan and Rani Mukerji’s ‘Chalte Chalte’ was one of the greatest blockbuster films of its time. The fans praised their performances and the story of the movie. But some of you may not be aware of the fact that gorgeous actress Aishwarya Rai was supposed to portray the female lead in the flick.

It is speculated that Aishwarya Rai has started acting in the movie, but, suddenly one day Salman Khan showed up on the set in a drunken state and stormed a ruckus. It was rumoured that Salman Khan and Aishwarya Rai were in a relationship. After this situation, Shah Rukh Khan replaced Aishwarya Rai with Rani Mukerji as the female protagonist as he was ticked off.

But, SRK has also apologized about the problem and had expressed that it was wrong of him to drop Aishwarya Rai from the movie and it was unfair to her. But, he also said that, though it was not her fault, as a producer, he thought it was the correct thing to do at that time.

Even Aishwarya Rai has spoken on the issue on a chat show and explained that there were talks of several movies with Shah Rukh Khan but surprisingly, without any word, it was terminated.