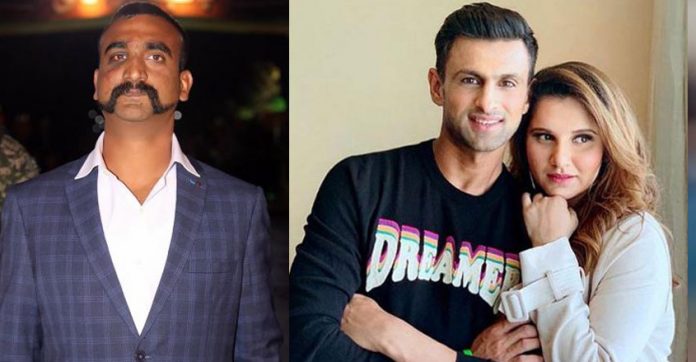 Pakistan Air force shot down two Indian flights (aircraft) for violating their airspace and captured Wing Commander Abhinandan when he landed on the Pakistani side on 27th February.

Pakistan Prime Minister Imran Khan released a statement on Thursday that the Pakistan government will release Abhinandhan Varthaman as a ‘sign of peace’. He was handed over to Indian officials at Pakistan’s Wagah border yesterday night at 9:00 P.M.

After he came back to India, there were huge waves of relief and happiness among Indians. The entire country is celebrating his return and several celebrities across different industries including Anupam Kher, Shah Rukh Khan, Raveena Tandon, Anil Kumble, Varun Dhawan, and Ranveer Singh hailed Abhinandan and welcomed him back to India.

Tennis ace player Sania Mirza, who is married to Pakistani cricket player Shoaib Malik took to twitter to hail Indian Air Force Wing Commander Abhinandhan Varthaman as the hero in the truest sense. Her post reads, “Welcome back Wing Commander Abhinandan .. you are our HERO in the truest sense. The country salutes you (Abhinandan) and the bravery and dignity you have shown.”
But, Sania Mirza’s husband Shoaib Malik came under fire after he tweeted “Hamara #PakistanZindabad”. Several netizens warned him of banning him enter Hyderabad. Some tweets even warned him of physical assault if he set foot in India. BJP leader Raja Singh even demanded Telengana CM K ChandrashekarRao to remove Sania Mirza as a brand ambassador of Telangana.