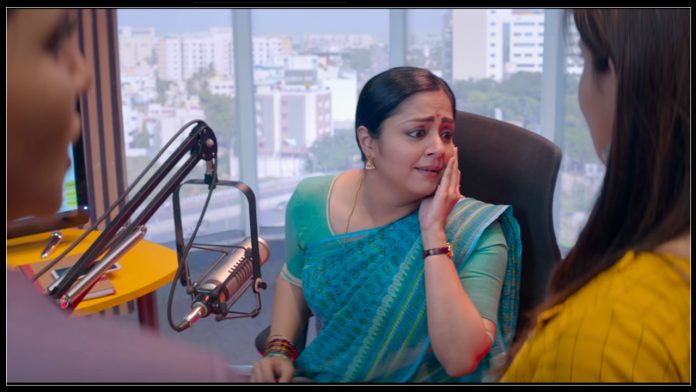 Versatile actress Jyothika, who made a terrific comeback to acting after an eight-year-long break in “36 Vayadhinile” and now she starts her second innings in tamil cinima. Her last project “nachiyar” gave her a profound image and now she is engaged in “Kaatrin Molzhi” Directed by Radha Mohan.

The movie is the official remake of Bollywood’s “Tumhari Sulu” were hindi actress Vidya Balan.played a lead role. Jyothi had already worked with Director Ratha mohan in “Mozhi” after 11 years Jyothi again had a chance to act in Ratha mohan directional. Recently the teaser of “Kaatrin Molzhi” has been released and the movie will hit the screen on October 18.

Kaatrin Mozhi (lit. The Language of Wind) is a 2018 upcoming Indian Tamil-language comedy-drama film written and directed by Radha Mohan starring Jyothika. It is a remake of the Hindi film Tumhari Sulu. The film also features Vidharth and Lakshmi Manchu in supporting roles.[3][4][5]The film is now scheduled to release worldwide on 18 October 2018