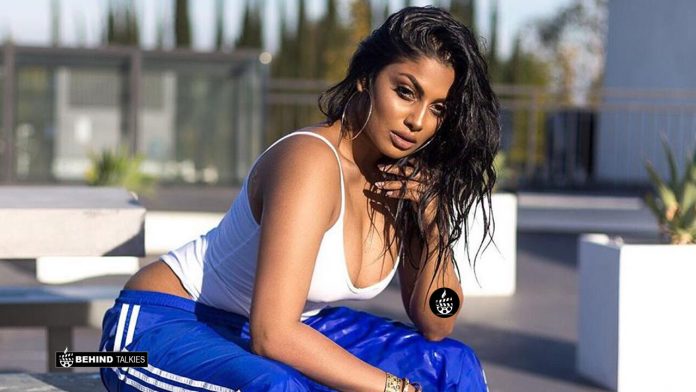 Chandrika Ravi is an Indian film actress, dancer, and model who was born in Melbourne, Australia. She is well-known for her role in films and TV commercials. She also showcased her talents in various commercials and TV shows. Chandrika Ravi has similarity in face and appearance to Silk Smitha because of this she is sometimes called as Modern Silk Smitha in Tamilnadu.

Chandrika Ravi was born on 5th April 1988 in Melbourne, Australia. Her father Ravi Sreedharan is a Malayali and her mother Malika Ravi is a Tamilian. Chandrika is a brilliant and sexy figure. She is of 5’6” tall and weighs about 52 kg. Her vital stats are 35-26-36 with brown eyes and black hair. She did her schooling from Willetton Senior Hugh School in Perth and her graduation in English and Creative Arts (Drama) from Murdoch University in the year 2010.

She is a well-trained dancer and got her professional dance training from Indian classical dance forum in Bharathanatyam and Kathak. She also got training in Western Dance form like Jazz, Contemporary and Ballet from Australian National Youth Performing Arts Group.

After finishing her graduation from Australia she moved to the USA for her further studies in Diploma in Acting for Film from New York Film Academy in 2013. She nurtured her acting skills in the academy. Chandrika started her career as a model. She won Miss Maxim India Runner Up title in the year 2014 and also placed as a finalist in Miss World Australia and Miss India Australia.

Chandrika got her first assignment as heroine in the film Sei which is unable to reach the big screen during the year 2017. Later in 2018, her role in the movie Iruttu Araiyil Murrattu Kuththu showcased her talent. Her role in the film was a ghost. Her interest in modeling is shown by her acting in many commercial campaigns and appearing in International Magazines.

In the year 2013, Chandrika got herself into American TV show Beverly Hills Pawn and also in TV shows like Travel Secrets California and Bollywood to Hollywood. She has also performed in some of the stage shows like A Midsummer Night’s Dream, A Caucasian Chalk Circle and Narakasura. HEr TV commercials include U Know What Works Kotex, Heineken, Apple iPhone 5c and Zoolander 2 Official TVC.